Rep. Al Gentry leads a bipartisan group of legislators on behalf of Kentuckians with disabilities 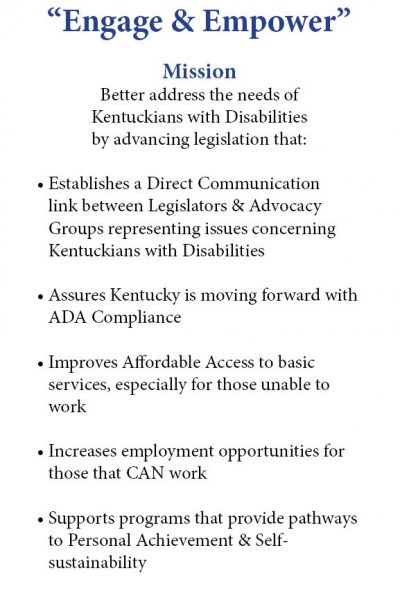 Frankfort, KY — A bipartisan group of legislators committed to helping Kentuckians with disabilities came together in the Kentucky House chamber today to announce that they were forming the “Engage & Empower Caucus.”  It will be co-chaired by state Rep. Al Gentry, a Louisville Democrat, and Rep. Brandon Reed, a Hodgenville Republican.

“I’m proud to work with Rep. Brandon Reed and our fellow caucus members who feel as strongly as we do and are just as committed to this cause,” Rep. Gentry said.  “We want this group to serve as a direct link between advocacy groups and our fellow legislators.  Our goal is to help make Kentucky a more accessible place in a variety of ways and to support programs that provide pathways for personal achievement and self-sustainability.  We’ve already filed several bills that move us further in that direction.”

“The challenges that people with disabilities face are not defined by political party or any urban/rural divide, and those issues have no impact, either, on the Engage & Empower Caucus,” Rep. Reed said.  “We may come from different parties and different parts of the state, but we all want to do what we can to bring the private and public sectors together in a way that truly benefits everyone.  We’ve seen the success of this bipartisan work in our adoption and foster care policies and in making our schools safer; this caucus is built on that very same model.”

Both Reps. Gentry and Reed said they came together to form this caucus because they understand the challenges facing those with disabilities.  Rep. Gentry lost an arm due to a workplace accident, while Rep. Reed has cerebral palsy.

During the media event, the caucus highlighted about a half-dozen bills they’ve either filed this legislative session or soon will.

That legislation includes HB 8, which is focused on dyslexia education; HB 150, a Golden Alert system for those with defined impairments; HB 180, which creates a similar Green Alert for veterans at-risk; HB 226, which establishes a farmer-focused mental health program; HB 228, which increases the homestead exemption for disabled veterans; and SB 20, which would establish treatment and restraint rules for children with developmental disabilities.

Other bills to be filed would focus on insurance fairness for amputees and tax credits for those who modify their homes to make them more accessible.

In addition to Representatives Gentry and Reed, other inaugural caucus members include: